Hashigui-iwa Rocks is located in Kushimoto Town, Wakayama Prefecture.
These massive strangely-shaped rocks are lined up from Kushimoto to Kii Oshima island over a width of 15 meter and a length of about 900 meter.
Hashigui-iwa literally means Bridge Pillar Rocks, because they look like the pillars of a bridge.
The magma which rose from the underground entered the mudstone layer and solidified, and then the soft mudstone layer was eroded by the waves.
The hard quartz porphyry parts were left as if only the bridge pillars were standing.
The rocks scattered along the coast are fragments of Hashigui-iwa rocks, which are thought to have been carried to the land by the tsunami caused by the great earthquake.
There is a legend about Hashigui-iwa rocks.
Kobo Daishi Kukai was a founder of Shingon Esoteric Buddhism in the 9 th century.
Kobo Daishi and Amanojaku made a bet and Kobo Daishi made Amanojaku build a bridge.
But Amanojaku tired very much and rang in imitation of the voice of a chiken.
Therefore Kobo Daishi misunderstood that it was dawn and stopped building the bridge.
Hashigui-iwa is located in the Yoshino Kumano National Park and is designated as a national scenic spot and a natural monument.
It takes about 20 minutes from the Kushimoto station of the JR Kisei Line. 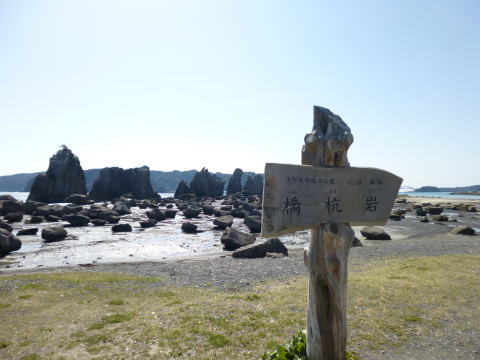 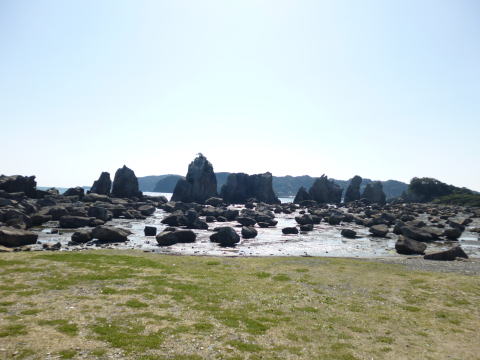